Picking the draw weight and right poundage is a balance between speed, control and strength.

Shooting heavy draw weight requires an archer to have adapted their physical training. It is essential that poundage is not increased beyond physical capability to prevent injury.

One of the most common questions that people unfamiliar with archery ask is, whether you have to be really strong to shoot.

The universal advice is to start shooting at a low poundage and work your way up in weight as your strength and technique improves. For shooting outdoors at 70 metres, a more powerful bow will push the arrow faster, meaning it will be less affected by wind, but being able to control the bow and execute a shot accurately is more important than raw power.

It’s difficult to generalise, but the recurve men at the 2018 Hyundai Archery World Cup Final shot an average bow weight of around 48-50 pounds. That’s about the same weight as the luggage most people check in at the airport.

A qualification round will involve an archer pulling a total weight of well over two tons. The women at the same tournament were shooting a few pounds lighter, on average. 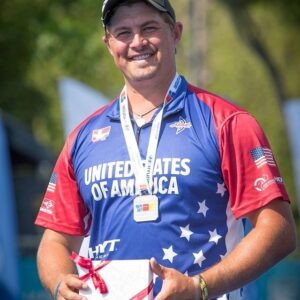 “The limbs got a little faster and my arrows tune at less weight. You want to shoot whatever you can control and you always want to be in control of the bow,” he said.

“Even if you have control, you need to know your recovery time. You might have control over 53 or 54 pounds but it will break down your body faster, and after three to four days of training you will get really sore and need two days off.”

Shooting a bow day-in, day-out shouldn’t excessively fatigue muscles. A tired body won’t deliver the same sequence of movements as a fresh one.

Most international archers take two bows to competition, one primary and one spare in case of equipment failure.

“One is 50 pounds, one is 50 and a half. Same arrows though. I’ve built my way up to 50, and I decided that was enough, and I’m not going to increase it any more. I don’t switch to a lower poundage for indoors, either. I want the same feeling all year round,” he said.

After shooting 55 pounds for the last two years, Steve’s teammate Sjef van den Berg has come down to 50, too. He said that if you shoot too high a poundage, it’s difficult to execute technique properly.

Young Turkish archer Mete Gazoz had a break-out season in 2018, shooting consistent scores of 680+ in qualification at competition and taking major wins including the Hyundai Archery World Cup stage in Berlin.

The patch of form coincided with an increase in poundage, up to the 53 he’s now shooting.

“I know you look at him and he seems very slim, but he can handle it,” said Goktug Ergin, Mete’s coach. “It gives us some advantage on the motivation side, because Mete believes that if he can get some advantage over the others, he can win it this way. This is his personality.”

None of these top archers started shooting such hefty weights without working up to it.

It’s a mistake that many improving archers fall into, sacrificing progress in form for an expected quick-fix in arrow speed that accompanies a poundage increase. It rarely, if ever, works out – and can cause serious injury.

“I see a lot of young people who go up way too fast in terms of poundage, and I would definitely recommend taking it very slow,” said Steve Wijler.

The ability to pull back a heavier bow shouldn’t come from shooting arrows either. Archers should weight train, even with the bow itself, to build the strength – so that there’s not the damaging effect on routine.

And there’s practically no need to hit the heavy heights that some archers shoot.

“There’s a physical difference between Asian and Western archers. The height and muscle of Asian athletes do not fit so well with heavier bows,” said coach Kim Seonghoon.

“It’s always about getting the tune absolutely right. We try to get the perfect combination between the athlete and the equipment.”

So how heavy is a bow? Exactly as heavy as it needs to be for an archer to have absolute control, perfect tune and prevent injury. After all, it’s better to shoot a slow 10 than a fast eight.

HOW TO SHOOT BAREBOW ARCHERY

HOW TO AIM RECURVE BOW

20
No Result
View All Result